Why have a cat only clinic? 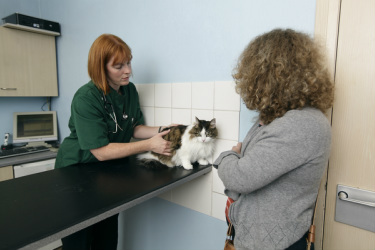 Veterinary Medicine has its roots back in the days when the horse was vital for transport, communication and farming. If the horse couldn't function, livelihoods were affected so it was essential to have someone who knew how to get the horse back to good health. Although we might not be impressed with the thought, veterinary surgeons were essentially the "car breakdown service" of their time!

When mechanised transport appeared, work horse numbers declined but the farming industry was then finding a greater need for the services of a veterinary surgeon. If small animals were treated, they tended to be dogs which had some value as a working animal. A cat? Forget it.

Lifestyles began to change. The population moved away from the country to live in cities and towns. People began to feel the need for a companion animal in their lives. The dog firmly established itself as the major player in this role. It no longer had to work for its keep but was integrated into the family structure. As owners became more emotionally bonded with their pets they had higher expectations of health care.

Veterinary medicine evolved accordingly. Textbooks concerning canine anatomy, medicine and surgery appeared. Vets started
treating dogs on a more regular basis and we began to see vets who were able to make a living working purely with small animals. But
not everyone had a dog. Although very little was known about other species, many vets were willing to see what they could do
for other pets.

Initially vets were treating cats like small dogs but it soon became clear that this contrary creature liked to do things its own way. We started recognising cat medicine in its own right in the 1970's. Veterinary knowledge boomed and vets became increasingly aware of the impossibility of retaining a comprehensive knowledge of all species. More vets opted to become either small or large animal practitioners. Even within these divisions, we realised the value of specialism in certain fields.

In the mid -eighties it became possible for vets to study for postgraduate certificates or diplomas in subjects such as orthopaedics, dermatology and ophthalmology. The growing public demand for more advanced treatment meant it was financially feasible for specialist vets to work purely in their area of expertise.

Lifestyles changed again. In the eighties we saw more working women and more single person households. We still wanted an animal companion in our lives but we needed one which was more independent than the dog. Cat numbers started to increase. In the mid 1990's the cat population in the United Kingdom had overtaken that of the dog.

We've now reached the stage where the number of cats in this country and the expectations of owners can allow the development of cat only practices. From being unheard of in the early 1990's, we now have around twenty of these practices in Great Britain.

The Veterinary Cat Clinic is one of only two private veterinary practices in Scotland to care exclusively for cats. Our clinic has been designed and equipped with your cat in mind. Comprehensive medical, surgical and diagnostic facilities are available and a
large range of up-to-date feline medicines is stocked.

Trips to a veterinary practice can be quite stressful for cats, but a building free of the sights and sounds of other species means we
can provide as relaxed an atmosphere as possible for your pet. 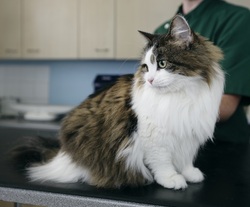 If you live too far away to make use of our services, visit the Royal College of Veterinary Surgeons website to find a veterinary clinic near you. Speak to local cat rescue organisations or other cat owners to find out your nearest cat friendly practice.

"Cats are rather delicate creatures and they are subject to a good many ailments, but I never heard of one who suffered from insomnia." - Joseph Wood Krutch