As a clinic full of lifelong cat owners, all of our staff understand just how upsetting the loss of our feline companions can be.  We hope that this section of our website allows our owners the opportunity to share some of their treasured memories and stories in memorial of their much loved cats.
If you would like us to add a memorial for your cat, please email the clinic with your chosen text - a few simple words or few paragraphs if you would like - and a good quality photograph if possible also.
​
Please note, this page is for patients of The Cat Clinic only.
We will use the wording much as you provide it to us but reserve the right to edit, remove or not publish anything deemed inappropriate.

We got Percy in 2010 as a kitten, and straight away fell in love with him. Not only was he so so handsome, he never once scratched, he was always just looking for love and affection. Percy quickly showed signs of what we thought was an allergy, and after some tests by the cat clinic he was diagnosed with Rodent ulcers which he was so brave in dealing with for his whole life. We introduced his best friend Sooty to our family a few years after getting Percy and while they never did cuddle up together they were very content in each other’s company. Our hearts were broken in October 2021 when we made the decision to put Percy to sleep; his ulcers had turned cancerous. He has left such a void in our family and we will love and miss him forever. He was a constant companion and so loved. Until we meet again, Percy cat xx 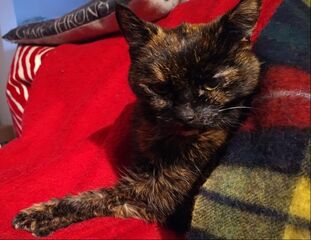 Ginny was a special cat!
I moved to Scotland on my own. I had initially worked in a cattery for a few months and then, when I changed jobs and I had to live on my own with no cats around for the first time in my life, it only took me a few months to decide that I needed a cat in my life again, so I have called the cattery owner and told her that I am looking for an indoor cat to rehome and to call me if she hears of anyone looking to rehome such a cat. She called me back ten minutes later and said “I have a cat for you” – someone called her immediately after our conversation to let her know that they are looking to rehome their young, female, tortie indoor cat...  Ginny moved in with me three days later and stayed for 16 years.
Ginny was always a memorable cat for everyone who met her – any cats getting in her face would get a swift punch on the nose and any humans who would try to pet her without looking at her and paying full attention would get a warning bite. She also judged our new human friends on the quality of food they would bring to our house – those with fish suppers and prawn snacks would get a quick seal of approval, provided they would share. She had some weird food tastes too, I caught her snacking on spicy crisps and once she ate a butterfly.
Ginny was always highly independent – the idea of going for walks with her on a lead got dropped quickly, after she turned it into a game of how to make me drop the lead, by going under parked cars or through tight spaces where I couldn’t fit, she definitely had fun, me, less so. She liked having other cats in the house but on her own terms, she never formed close social bonds with any of them, but would sometimes get involved in games of chase and fisticuffs.
Ginny also had a real “tortitude” – always very vocal about what she didn’t like, for example car trips, and at the age of 17 she still had to be held under a towel to have her nails clipped – which I’m sure Cat Clinic staff members remember well!
We have experienced life together for 16 years, during this time we lived in three towns and villages, in eight properties, with other three cats, a pygmy hedgehog and a bearded dragon. Everyone I know in Scotland, she has also met and judged and she was a great judge of humans – she has given a seal of approval to each of my two partners. She has defeated every illness that she had in her life and never deteriorated mentally, until her 19 years old body got tired and frail and she left us peacefully in her sleep, in her own bed, surrounded by humans and cats who loved her and cared about her. She was a family member and I miss her terribly.
​Sleep well, feisty one, until we meet across the Rainbow Bridge.