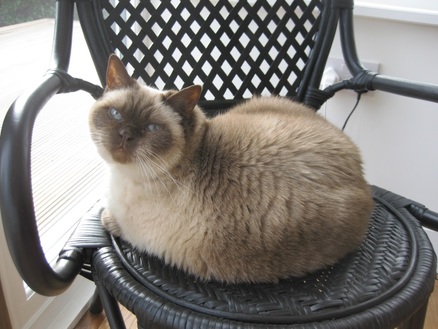 The following article was published on the owner's facebook page and they very kindly gave us permission to put it on our website:

"I hope readers will forgive me for not charging forth into a hot political or economic topic today. For the past week our cat, a constant companion for more than twelve years, has been very poorly. Excess fluid round the heart restricted her movement and drained her of energy. Despite efforts by the vet and various varieties of medication, she became unable to move. This morning, under the supervision of the vet, she was put to sleep in my arms.

Against all logic and sense of proportion – “snap out of it, it’s only a cat” – I have been hit by an intense sense of sadness and loss. We collected Miss Lulubelle, a British short hair chocolate colour point born on an Aberdeen farm, from a rescue centre in Edinburgh. Over the years she became an inseparable part of our lives. Now we are inconsolable.

As with all cats, she came with a set of impenetrable mysteries. Central to these was an ability to read our moods and our movements. We thought we had got to know everything there was to know about her. Her knowledge of us was infinitely greater.

Here is one of her enduring mysteries - one of many I will miss most. For most of the past twelve years I worked full-time on The Scotsman. In the early years the Editor-in-Chief was Andrew Neil, an editor notoriously difficult to please. His demands on time and energy were insatiable. I would return home to our flat late in the evenings tense and frazzled tired, my head buzzing with the 25 things I hadn’t done, stories I had failed to spot, articles that should have been written and headlines that missed the spot. Lulubelle would climb on my lap and within five minutes something happened that no drink or medicine could ever effect: all that tension and stress effortlessly disappeared.

In periods when I was poorly, she clambered onto the bed and cuddled close. When I woke up from bad dreams or nightmares her purring was the most reassuring sound I could ever imagine. She could intuitively predict my bedtimes, rushing up the stairs to be first on the bed. In the mornings I was awoken more often than not by the soft thump of her paws as she jumped down to the floor to take up a position by her food bowl.

As with all cats, her ability to anticipate our arrival at the door was extraordinary, as if she could hear my footsteps coming down Campbell’s Close. Her ability to anticipate when food was being put down for her was even more astonishing. If ever there was a cats Olympics, she would win gold for the alacrity with which she would leap from an apparently deep slumber in the armchair and bound through to take up her position in the kitchen.

As with all cats, there was no need to wonder where the most comfortable chair in the house could be found. Lulubelle would be curled up in it and not to be disturbed.

And as with all cats she had, late in the evenings, utterly unpredictable but deafening skitter times. At the climax to some tense TV drama, ping pong balls would be sent flying to all corners of the room, Lulubelle in hot, demonic pursuit.

During the day her favourite activity, when not sleeping or sun bathing by the window, was to sit in the middle of the outside doorway, half way in and half way out, the way that cats do.

All pet owners will know how they can wheedle their way into our hearts to such a degree that we not only come to live shared lives, but also to alter our movements and habits to their advantage.

I never knew her views on independence or banker bonuses or Quantitative Easing. I would talk to her a lot, but she never let on her own political leanings. She had bigger things to preoccupy her. Fish distribution policy, or chicken gravy supplies. Then there was chasing flies. And watching birds. She loved our garden in Lochearnhead, the catnip, the bees and flowers and stalking through the unmown grass.

She also had the gentlest nature of any cat I have ever known. Here was our constant companion, our pal, our affection, our de-stresser, our comfort, our amusement, our attention, our unconditional love. I hope she has not gone into a darkness but to one of her favourite places: sitting by the garden fence in Lochearnhead, watching the lambs in the games field. We will miss her terribly."