What does neutering involve?

Neutering is the overall term given to surgical procedures which render a male or female
cat incapable of reproducing. Under a general anaesthetic, male cats have the fur "plucked" or shaved from their scrotum. Two small incisions are made in the skin of the scrotum and the cat is castrated, i.e. has both testicles removed. Female cats undergo the equivalent of a full
hysterectomy. An area on the flank or the stomach is shaved. Both ovaries and the uterus can usually be removed through a neat little incision. Males are usually back to normal the day after their operation, while females may take a day or two longer. Any concerns about any postoperative discomfort are allayed by the use of painkilling drugs.


Why should I have my cat neutered?

The most important reason is to control the cat population. You may be a responsible cat owner who can find homes for your cat's kittens, but a quick look at the statistics sadly show that there are too many people who aren't. There are also definite health benefits for your cat. Entire male cats will wander and get into fights with other cats. The lifestyle induced by their hormones makes them more likely to have accidents, and more likely to be exposed to potentially fatal infectious diseases (FeLV, FIV). Entire female cats will also be exposed to these diseases. Additionally, if females are allowed to breed repeatedly, they may become very rundown, and can also suffer from womb infections later in life. Most cats reach sexual maturity when they are around 8 or 9 months of age. We usually carry out the operation when they are five to six months old. This is an age when they are quite robust and well grown, but before there is any chance of a mishap! Earlier neutering is possible and is particularly popular with rescue organisations. Our vets are happy to discuss the option of early neutering for your cat.

Isn't there a risk with the anaesthetic and surgery?

It is certainly true that every anaesthetic and surgical procedure carries some risk, but these are minimized as much as possible by modern anaesthetics and surgical techniques. Your cat is at greater risk from the problems it encounters if left entire.

Will my cat's personality change after the operation?

Most cats are neutered before they reach puberty, so the personality they have at that point is one devoid of any hormones. This means that no change is likely. If older cats are neutered, they tend to calm down a little and stay nearer home, so any changes are invariably for the better.

Will neutering prevent my cat from spraying?

Spraying is an activity where a cat squirts a small amount of urine to act as a scent mark. The behaviour is strongly linked to sex hormones, so if we neuter we see a significant reduction in spraying. However, it doesn't prevent the behaviour altogether. Spraying is not uncommon in neutered cats (male and female), and is usually a sign that something has unsettled the cat. 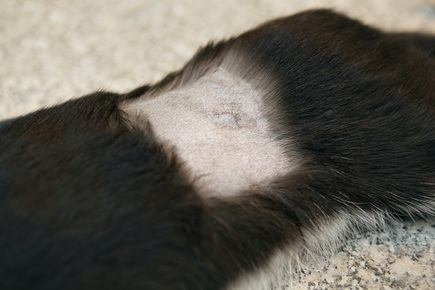 At The Cat Clinic, we've developed a spaying technique which means there are no external stitches and no need for an Elizabethan collar because there's nothing to chew out! We've been using this technique for several years now as it is very cat friendly. It may not be suitable for all cats but it is suitable for the vast majority. The photo shows the typical post-operative wound - hopefully demonstrating not much to be seen other than the shaved patch of fur on the side of the abdomen!